Increased melting of marine-terminating glaciers of the Greenland Ice Sheet could lead to unstable dynamic ice mass loss, further accelerating global sea level rise. To better understand the historical context of the present-day widespread glacier front retreat, we mapped frontal positions for two years, 1994 and 2017, for 146 and 251 major outlet glaciers, respectively. Front position locations were identified using optical remote sensing imagery from the Landsat 5 (1994) and Landsat 8 (2017) satellites. Of the fronts surveyed, we find that 86% retreated between 2017 and 1994 and 62% retreated between 2017 and 2015, when the most recent glacial front positions were recorded. In addition, ice surface elevation differences for four dynamically-thinning glaciers were calculated using data collected from NASA’s Oceans Melting Greenland (OMG) mission in 2016 and 2017 by the Glacier and Ice Surface Topography Interferometer (GLISTIN-A). In each case, ice surface lowering was observed in excess of 10 m within the 10km-wide swath of GLISTIN-A near the glacier front. This evaluation of glacier change advances our understanding of ocean-driven Greenland ice mass loss.

Increased melting of marine-terminating glaciers of the Greenland Ice Sheet could lead to dynamic ice mass loss, further speeding up global sea level rise. Dynamic change refers to a rapid amount of volume flux in a glacier that can be unstable. This dynamic outlet glacier response includes acceleration, thinning, and frontal calving, where chunks of icebergs break off. Glaciers can lose large amounts of their ice through processes such as thinning from the melting of ice or calving of the front of the glacier, when huge chunks of ice break off and separate from the glacier as it retreats.1 Thermodynamic melting of the vertical face of marine-terminating glaciers (Figure 1)  requires a dynamic ocean circulation process where dense warm saline waters flow towards the glacier at depth and induce subsurface melting before cooling, freshening, and eventually flowing away from the glacier in a shallower layer.2 Depending on many factors including glacier bed and fjord geometry, glacier melting from its base may not trigger an immediate dynamical response. This difference of dynamical glacier responses to similar stresses of thermodynamic melting can give rise to variability between proximal glaciers with some retreating and others remaining stable.1 Over long timescales, with respect to overall loss of ice mass, there is a relationship between thinning and glacial front retreats as a change in one proportionally changes the other.3

From 1992 to 2011, the Greenland ice sheet mass loss has increased over four times, from 51 to 211 gigatons per year.  Thus, scientists are eager to collect more data on Greenland and to better understand subaqueous melting and calving processes. NASA’s Oceans Melting Greenland (OMG) mission is investigating the impacts of ocean melting on the ice sheet’s marine-terminating glaciers through ocean, glacier and bathymetry campaigns. Specific to ice observations, OMG aims to observe year-to-year changes of glacier heights and extent of nearly all of Greenland’s major marine-terminating glaciers.4 Due to the large influx of data, this is the first time the project was able to capture, synthesize and analyze this data to further studies of anomalous glacial regions across the ice sheet.

In support of the OMG mission, the goal of this research project was to measure volume changes for Greenland’s marine-terminating glaciers. These volume changes are determined by frontal position change and ice surface elevation. This was achieved through creating a detailed inventory of Greenland glacier front positions in 1994 and 2017 using Landsat imagery. The inventory was used to characterize the distribution of glacier front position changes for two periods: 2017 vs. 1994 and 2017 vs. 2015. To contextualize recent changes, glacier front positions in 1994 were catalogued where Landsat imagery permitted. These 1994 front positions expand an existing database that was limited to northwest Greenland. In order to calculate ice surface elevation changes for four rapidly-thinning glaciers, there was use of the OMG GLISTIN-A interferometric radar. These four glaciers were chosen based on large surface lowering rates (∆h/∆t) of glaciers measured between 2005 and 2007 that fall within available GLISTIN-A swaths for both 2017 and 20166. Our analysis of version 3 of OMG’s GLISTIN-A data shows continued rapid thinning of four outlet glaciers exceeding 10m/yr.

METHODOLOGY (How was it figured out?)

Glacier front positions were traced (digitized) manually after examining the Landsat 8 Operational Land Imager (OLI) /Thermal Infrared Sensor (TIRS) and Landsat 5 Thematic Mapper (TM) satellite scenes in conjunction with other data (e.g. use of a Greenland base layer with a mosaic of Landsat 7 scenes. Analysis of these data and the mapping of glacier front positions was done through use of the QGIS open-source geographic information system software.

For each glacier front, candidate Landsat scenes were identified by their path/row designation as defined by the descending orbital track in the World Reference System 2 (WRS 2). After identifying the path and row of candidate scenes, the corresponding images files were downloaded from the USGS Earth Explorer portal. These scenes are filtered by acquisition date range, land scene cover and cloud cover tolerances, data type, and sensor identifier type. After importing the geographically-referenced Landsat scenes of a glacier front into QGIS, the front position was identified and then manually traced by defining a set of connected points. The resulting set of points define a “vector” layer that is saved using the common ESRI shapefile format. This technique allowed for a comprehensive data set to record glacial positions for 2017 and 1994.

Over the course of this study, over 200 glacier fronts were mapped for 2017 and 1994.  Where possible, we mapped the same glaciers whose 2015 positions were previously identified by the OMG team (Figure 2). Use of Landsat imagery provided the study with high spatial resolution (30 m) and minimal cloud/scene cover (<10% -<20%) for mapping out the frontal positions of glaciers. For 2017, the Landsat images were found between March and April whereas for 1994 the images were collected between July and September due to lack of availability of March and April scenes. Finding new 2017 scenes and digitizing older 1994 scenes provides a more complete database of the historical record of glacier front position change within Greenland. With these new front data, we can better contextualize recent changes and understand the behavior of glaciers with greater depth (Figure 4).

In analyzing the extent of 2017 glacier front position changes distributed across Greenland relative to 1994 and 2015 positions, we defined six different categories to describe the type of change observed (Figure 5). These six categories are: 1) clear advance, 2) clear retreat, 3) no change or static, 4) undetermined due to limited number of scenes that cannot be clarified by mosaic Landsat scenes, 5) advance/retreat where a part of the glacier has advanced and another retreated and 6) not available where scenes cannot be found for comparison. The categories of advance and retreat are used if a front position’s movement exceed 150m. Note, we cannot distinguish between interannual and seasonal front position variations. We identified retreat in 183 out of 214 glaciers between 2017 and 1994 and 161 out of 260 between 2017 and 2015. Although 55 out of 260 glaciers between 2017 and 2015 advanced, most front changes are categorized as retreat.

Four dynamically thinning glaciers around Greenland were studied based on available GLISTIN-A flight lines that overlapped with acquired glacial surface elevation lowering data from an earlier mission5. These glaciers (Hagen Brae, Harald Moltke Brae, Tracy Gletscher, Helheimgletscher) had a negative elevation change rate (ma-1) relationship derived between 2005 to 20075. First, Hagen Brae (Figure 6) shows surface lowering of 10 m upstream of the frontal position. Harald Moltke Brae (Figure 7) also follows the same pattern. For Tracy Gletscher (Figure 8), we find both thinning and retreat. However, Heilprin Gletscher, a small dynamically thinning glacier, demonstrates inconsistent patches of surface lowering that is not as continuous as its neighbor, Tracy Gletscher. The fjord into which both Tracy and Heilprin glaciers flow needs to be studied further in terms of its bathymetry, salinity and temperature profiles to understand why these two comparable glaciers seem to have such different elevation differences. Lastly, Helheimgletscher (Figure 9), a large dynamically thinning glacier, has three tributaries that feed into the channel where the front is contained. Although the GLISTIN-A swath analyzed is upstream of the front, we observe that the glacier is thinning at a more rapid rate than that of the last 23 years.

Our newly mapped glacier front positions expand the record of glacier evolutions over the past quarter century. Currently, the glacier front data are running through a submission process to the Physical Oceanography Distributed Active Archive Center (PO. DAAC) at JPL. Having our data stored at PO.DAAC will allow the further dissemination of more comprehensive frontal position change amounts to those who require a database for their research on Greenland. Furthermore, these data will be useful in guiding to OMG project scientists if they need to alter GLISTIN-A swath positions based on ice front advance or retreat. These frontal position shapefiles, all the corresponding Landsat images and reference spreadsheet files are in the shared directory of the OMG Linux server for all team members to use. In terms of the height data, there are still 80 elevation comparisons to run beyond the 4 completed.

This internship addressed the key concept of understanding the effect of subaqueous melts and overall glacial ice mass loss in terms of ocean-ice interactions. Determining the level of glacier volume change throughout Greenland provides further data to compare against other measurements made within the OMG mission including multibeam sonar and water column profiles of ocean temperature and salinity collected by Airborne eXpendable conductivity, temperature, and depth (AXCTD) probes. Both bathymetry and ocean hydrographic data are expected to be useful for investigations into the processes of subaqueous melting.4 Increasing knowledge of this phenomena is imperative to learning more about global sea level rise and the significant role oceans play in shaping ice masses around the world.  In particular, this project has motivated a study of ocean-ice interactions with respect to Tracy and Heilprin Gletschers as they are adjacent systems that experience drastically different rates of dynamic ice loss .

This research was carried out at Jet Propulsion Laboratory, California Institute of Technology, and was sponsored by the Summer Internship Program/Dr. Joshua Willis and the National Aeronautics and Space Administration. Also, I would like to thank Dr.Willis for all his support towards this project and providing academic career guidance, Dr. Ian Fenty and Dr. Ala Khazendar for acting as my mentors and helping with day to day issues and planning of the trajectory of this internship, and Keri Smith for organizing my arrival to JPL and providing logistical assistance. Also, I want to appreciate the efforts of Sean Hardman for setting me up with my account on the Linux server and providing knowledge on the computer infrastructure of the OMG team. Lastly, I want to thank Jessica Hausman in the PO.DAAC group in helping me publish my glacier front data and supplementary data sets. 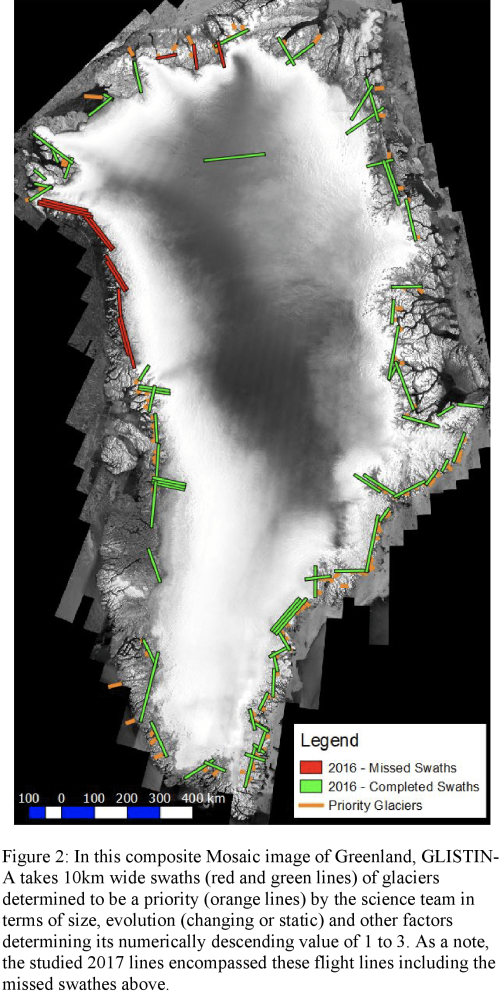